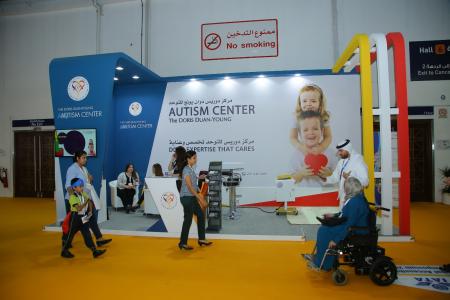 High tech breakthroughs that have revolutionized the world Technologies such as voice and robot assistants, Artificial Intelligence and Regenerative medicine at AccessAbilities Expo. Vasujit Kalia in tête-à-tête with some of the exhibitors during the Expo.

Dubai  AccessAbilities  Expo, which  recently  concluded, had on display some next generation technology, which catered to the needs of the people with special needs.

The Doris Duban-Young Autism Center, which has been helping families with the autism since 1994 had a very high-tech innovation on display. Speaking about the innovation Mara Torres, Managing Manager, said, “We have on display Magic Carpets which is a projector that has interactive games that our kids play on. It improves their sensory skills and memory. This also improves the social skills of the children as they play with other kids as well.”

Al Ain-based Health Star Company, which is into trading of Medical Equipment, had a very innovative product on display. Speaking about this product was Mohammed Hamad, Sales Representative from the company said,

“We are displaying a power assistant named ‘Smart Drive’ which can be mounted on the rigid or a folding wheel chair. A smart watch is connected to this device via a blue tooth. Mount this device on the wheel chair and it helps move the chair with just one push.”

UK-based Bright Sign introduced a glove that transforms the sign language into any spoken language. Ed Hill, Chief Executive Officer, who has flown all the way from London to be a part of this expo, said, “We give voice to those who can’t speak. Artificial intelligence has revolutionized the lives of those who need it the most. At Bright Sign we have introduced a glove which you wear it on your dominant hand, whether left or right, and it transforms the sign language into any spoken language.”

However, the center of attraction was one stall that had on display Livio AI hearing device, speaking about his product was Giscard Bechara, Managing Director, Starkey MEA FZCO, “Livio AI is the only hearing device in the world with artificial intelligence. It means that the machine is taking the right decision to help the person on its own. For example, if I’m walking with the Livio AI and I fall down, courtesy its AI the machine will know that have fallen down and it send SMS to my relatives that I have fallen down and alerting them.”

On display was Smrtco, a unique application — a smart door lock. Jules, product exhibitor of Smrtco, said “Smart door lock gives you option to let the people enter using your smart phone or a tablet. The doorbell makes you see the person on your phone. Once a person is there you can speak to the person via the microphone which has built-in features. It is built not only for the people with disabilities but for everyone.”

Another product with high technical innovation was inclined wheel chair platform lift by Ajman Based Cedas.E.F. LLC.Afzal Ovvarakkal, Sales Engineer from the company, said, “It transports the wheel chair from the lower to the upper pedestrian. It comes with two options, one for the straight staircases and the other one for the curved staircases.”

Speaking about the innovation was Andy Faulkner, CEO, Topland General Trading, who said, “We have on display ‘SENTIBoard’. Sentire, translated from Italian, means feel, hear and sense. It has been designed and developed specifically for Dubai market. It aims to assist in becoming the People of Determination Centre of the World, currently it is being manufactured in Japan but soon we will  manufacture it in Dubai. In few month’s we will patent the technology across the world. The basic function of this board is that it converts sound into the vibrations. This is very useful for deaf people as they understand sound with vibrations better.”

Further elaborating about the technology Andy enthuses, “The key system element of SENTIBoard is a special high -performance Transducer, which converts sound electrical signals into mechanical vibrations. The Transducer can reproduce the 40Hz and lower sound range, which has been considered difficult until now. The 20-50Hz band is considered physiologically comfortable.

The SENTIBoard Transducer has high vibration conversion efficiency and exhibits excellent effects in reproducing fine vibrations. It can be used by everyone without highlighting that the user has a hearing disability and it can be accessed and used by many users at one time.”

It can be designed as per requirements of the particular project: key themes, tones and style in terms of: face of the SENTIBoard, the surface material used and its shape, size and color scheme used.

The recently concluded AccessAbilities Expo was held for the third time from November 5 to 7 at the Dubai World Trade Centre (DWTC), it provided a platform that reflected the aspirations and expectations of over 50 million People with Disabilities who reside in the Middle East.

Built on the success of the previous two editions, this year’s Expo provided even greater opportunities to explore the best and latest innovations and technologies from around the world that will enhance the lives of People with Determination.