In the heart of Dubai Healthcare City lies Mediclinic City Cancer Center which boasts to be Dubai’s most advanced facility for the diagnosis & treatment of cancer. Established in collaboration with the facility’s sister platform Hirslanden, it brings forth a wealth of knowledge and experience shared between the leading experts in Oncology to provide the best therapeutic programs for their patients.

I was privileged to have the opportunity to interview one of their leading Oncologists who is a pioneer in the öeld and has been responsible for the evolution of cancer care in the United Arab Emirates. He is the Vice President of Emirates Oncology Society and his imprint on the lives of patients and the healthcare marketplace is phenomenal.

His name is Dr. Falah Al Khatib and this is a description of my informative encounter with him.

As I walked into the corridor and through the waiting room I could not help but imagine the kind of emotional storm the patients harbored within their breasts. I hesitated for a moment as I was ushered in by the nurse, anxious about this gallant personality I was about to meet, for this was war and he was the general. There he sat, attentive, his blue eyes piercing, determined and focused.

I introduced myself as concisely as I could for I knew his battles were ongoing and he was far too familiar with the tug of war between hope and sorrow, between cancer and remission.

His smile brought a warmth to our conversation and my first question escaped my lips before I could suppress it. I was embarrassed as the question was rather selö sh. I wanted to know whether my work at MPC, a distributor of medical equipment and pharmacological treatments was having a positive impact on the lives of patients or was I merely floating in a sea of business, politics and profit margins. The discourse that followed is described below.

A linear accelerator is used to shoot particles into the targeted tissue site which emit ionizing radiation that controls or kills malignant cells.

“What role does radiotherapy play in oncology?”

Dr. Falah explained that Radiotherapy played a pivotal role in the management of patients with cancer. It is the only treatment for more than 75% of all cancer cases, either on its own or in conjunction with chemotherapy or surgical intervention. It is used in 60% to 80% of cases where palliative care is provided to patients suffering from fractures, metastasis and other secondary complications associated with cancer. Using radiotherapy as a treatment modality can be quite rewarding as it can eliminate the suffering caused by pain when no other treatment provides relief.

“What role does radiotherapy play in the treatment of breast cancer specifically?”

It is important to understand that breast cancer consists of two components. The disease local to the breast and that which has metastasized. It is therefore, of paramount importance that we stage the disease correctly using the tools available for accurate investigation. This will allow us to decide on the best possible treatment protocols to use. In the past the most effective method was considered to be radical surgery which involved complete excision of the breasts and the stripping away of the lymph node chains. Since then, we have come to realize that around 30% of cases have existing metastasis which is an alarming fact. Therefore, with the availability of modalities such as radiotherapy we can now excise the lump in the breast and provide radiotherapy which in therapeutic terms would be equivalent to mastectomy.

A diagnosis of cancer for most is a death sentence. There is a small percentage of people who understand the strides that cancer therapies have made and the impact that has on the quality of life of patients and survival rates, but u n fo r t u n a t e l y m o s t p e o p l e p e r c e i ve i t a s a n announcement of their funeral. It is quite common to find patients staggering in four of the five stages of grief, compounded with anxiety and depression that constantly reminds them of impending doom.

Dr. Falah further highlighted the psychological impact of breast cancer by tapping into his own experience of dealing with patients and described how on a daily basis, every patient he has treated had an elemental form of anxiety and depression clawing to the surface in different forms. Unfortunately, some patients are perpetually fixed in place on a stage of grief that they can’t seem to get past leading to detrimental consequences for their psychological health which naturally affects the physical health.

The case of Bilateral mastectomy performed on Angelina Jolie upon the discovery of genetic markers known to be grave risk factors for developing breast cancer has led a lot of women to demand the procedure despite not having the risk factors necessitating this radical approach.

A research conducted by the Emirates Cancer Society of which Dr. Falah is the Vice President concluded under the Presidenc y of Dr. Humaid Al- Shamsi that the demographic of patients in the UAE was considerably different to other countries. Dr. Falah emphasized that the patient demographic was that of a much younger population compared to the statistical data globally. Therefore, recommendations were made to decrease the screening age in the UAE to allow for better preventative measures to be adopted in the fight against breast cancer, specifically when a positive family history for genetic markers exists.

Furthermore, another research into whether consan- guineous marriages led to an increase in the incidence of breast cancer revealed little to no conclusive evidence of consanguineous marriages being a risk factor for breast cancer. It is important to understand that the population of the UAE is a heterogeneous community comprising of locals and expatriates in a pool requiring considerations that factor in the high incidences of breast cancer internationally. In the USA 1 in every 7 women has breast cancer, similarly in Europe 1 in every 8 women is suffering from the disease.

Dr. Falah was in charge of the Tumor registry from 1986 to 2007 in Tawam Hospital which gave him holistic insight into the trends in oncology. He explained that breast cancer is the largest cancer affecting the population in the UAE accounting for 25% of cancers in both genders and 40% in females only. In his time at Tawam Hospital he was primarily responsible for establishing the institution as a center of excellence for the treatment of cancer. 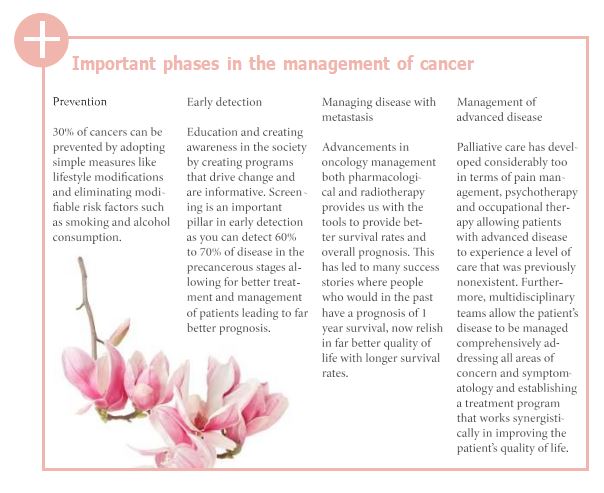 As I concluded my questions, I felt my heart sink a bit as the wealth of knowledge I had received was better than any lecture I had attended. I wanted to know what he envisioned for the future and the answer encompassed vision and passion. Dr. Falah stated that his focus is to pass the

experience and knowledge to the next generation of physicians . Moreover, he expanded on the need for a comprehensive cance  registry to be established which is currently being developed by the Ministry of Health to allow for research, prevention and better  allocation of resources in this war against cancer. His message to doc- tors was to stand with the patients against the disease, to fight their fears and comfort them in their time of need. This was his war, a lifetime dedicated to fighting battles against cancer and he was emerging victorious.

The UAE has many centers of excellence that provide cancer care and this is primarily due to the emphasis the governmental institutions have placed in addressing the need for excellence in cancer management. They have spared no effort in making all forms of resources available to physicians and healthcare institutions seeking to bring the highest level of care to the patient population in the UAE.

A testament to this is that the form of management that exist currently for patients with cancer, fulö lls the highest global standards in cancer care and places the UAE as a leader globally in the management of cancer. 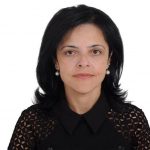 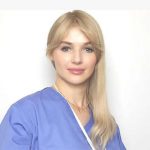 Technology a game changer in dermatology 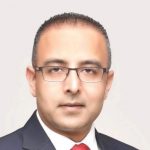 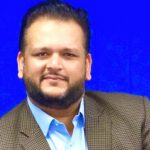